The Serengeti Plains in Tanzania's north-central region (Africa) is well-known for being a great place to shoot wildlife and the environment. Its sweeping panoramas and stunning natural features, which cover an area of 60,000 square kilometers, are responsible for much of the area's attractiveness.

There are around 2 million herbivores and thousands of predators in the Serengeti. The most frequent creatures found in the region are blue wildebeests, gazelles, zebras, and buffalos.

In the Serengeti National Park, a substantial area of the Serengeti Plain is protected and conserved from the ravages of modern society. A varied range of ecosystems and fauna may be found in this park, which covers around 12,950 square kilometers.

The Ngorongoro Conservation Area, which includes the Olduvai Gorge, where some of the world's oldest hominid fossils have been discovered, as well as the Ngorongoro Crater, the world's biggest unbroken volcanic caldera, is also situated here.

The History Of Serengeti Plain

When the first European explorers arrived in the region, the Maasai people had been grazing their animals on the open plains for roughly 200 years. Dr. Oscar Baumann, a German geographer, and explorer, first visited the region in 1892. Stewart Edward White, the first Brit to reach the Serengeti, documented his investigations in the northern Serengeti in 1913.

The British decided to establish a partial wildlife reserve of 800 acres (3.2 square kilometers) in the region in 1921 and a complete one in 1929 since lions were so scarce due to hunting. Serengeti National Park was formed in 1951 as a result of these measures.

After the original efforts of Bernhard Grzimek and his son Michael in the 1950s, the Serengeti gained more recognition. "Serengeti Shall Not Die," an early environmental conservation documentary, was written and directed by them together.

The Maasai were transferred to the Ngorongoro highlands as part of the park's construction and to protect the park's wildlife, a decision that has sparked a lot of debate.

The yearly migration of zebras and wildebeest from the grasslands of the south to the plain's northern reaches and back, often known as the "circular migration," is one of the most spectacular sights in the Serengeti Plain.

The world's longest overland migration begins in April when the south's grasses begin to dry up. Unable to live on the dry plain, the wildebeest sprint toward the north, unable to survive on the dry plain. After that, the zebras join the mass migration, making sure to keep their family groups together throughout the process.

Many of the animals find it difficult to make the lengthy journey north, especially when the males battle for dominance and breeding partners. The animals will graze and stay on the rich northern plains until November once they have arrived. The wildebeest and zebras begin their migration back to the pastures of the south once November arrives on the Serengeti Plain.

Lions and cheetahs frequently follow the herd as they leave the northern plains, posing a serious threat to animals who fall too far behind. Stampedes, which have been known to kill hundreds of frightened animals at once, are another difficulty for animals during migration. On the voyage alone, almost 250,000 wildebeests will perish.

Africa: The Serengeti, a documentary film released in 1994, chronicles the migration.

Administration And Protection Of Serengeti Plain

To encourage wildlife and vegetation growth, the Serengeti National Park closely safeguards the region's natural ecosystem. As a result, there is no place for people to live in the park. Early in the history of the Serengeti National Park, the residents of the region were relocated from the protected area so the space could be fenced and placed under the supervision of the Tanzanian government. The park's history is still rife with controversy as a result of its forced removal.

Only National Park employees, researchers, zoologists, and hotel employees are now allowed to live permanently on National Park property. Seronera, the park's administrative headquarters, and airfield are home to a large number of human settlements in the area.

The park has been designated as one of UNESCO's World Heritage Sites due to its biodiversity and ecological importance. The biannual game migration, which continues to attract people from all over the world, is an important part of the area's importance.

Land safaris are accessible for those who are prepared to pay, and tourism is a key component of the Serengeti National Park. Several million dollars in money from the Park have been used to enhance Tanzania's economy.

Where Is The Serengeti National Park? 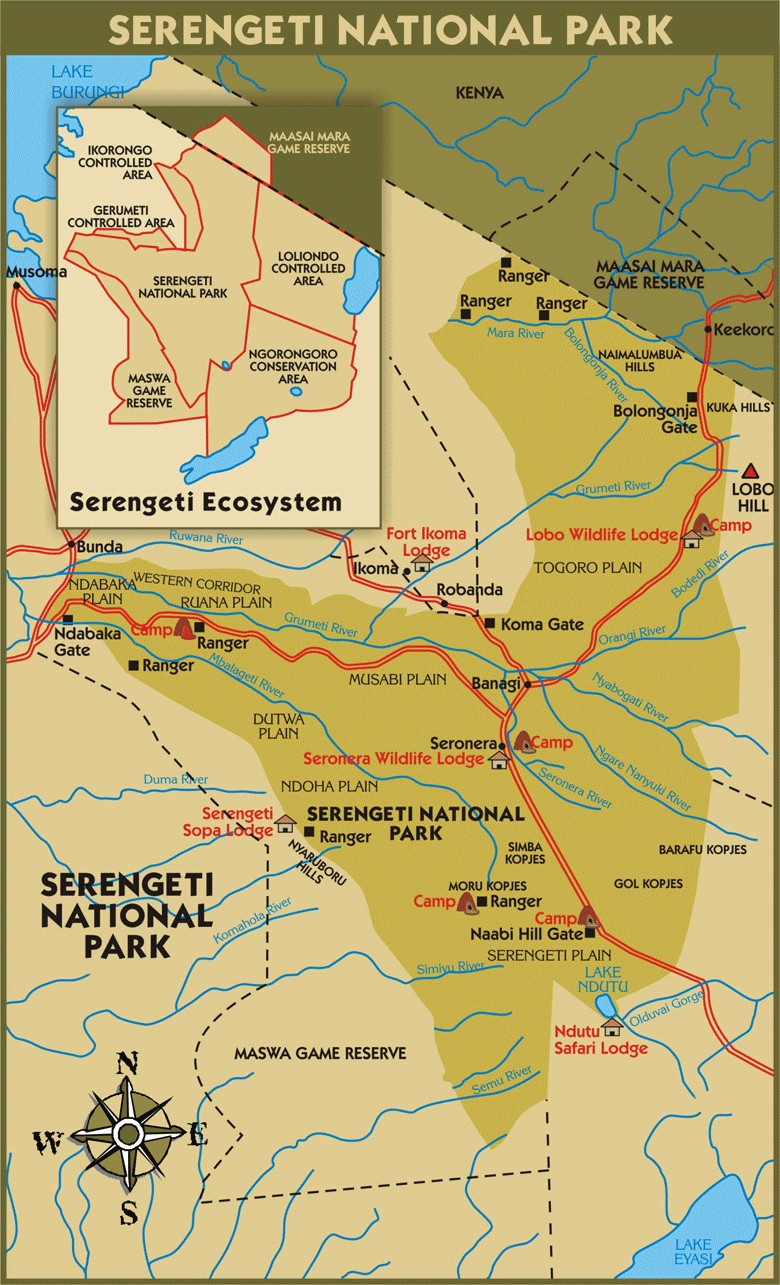 The Serengeti National Park is made up of four different types of land.

It's best to spend two to three days in the park to see as much as possible. Each area should be at least a half-day safari.

This location becomes quite remarkable between December and April each year, when many wildebeest calve in and begin their annual migration from this area. Before the annual migration, the short grass plains are also home to a large number of gazelle. Lake Ndutu (or Lagarja), a small seasonal lake surrounded by lovely acacia trees, is without a doubt the area's primary feature. Giraffes live in the area around the lake, which is also a birdwatcher's dream. There are a lot of pink flamingos there, as well as a lot of other kinds of birds.

People in the Masai language call them Moru Kopjes, which means "old" in English. They are farther north on their migration route. These Kopjes show some interesting geological formations made of ancient granite that were left standing after a lot of erosion and weathering over a long time. It's a good place to see African animals all year long because there is water for them to drink. There are a lot of big cats that like the kopjes, like lion and leopard. Rainwater collects in the rocky crevices, giving a wide range of animals a place to drink. They are great places to look for wildlife in the dry season, like lions who wait for animals to come to drink. Natural caves used by Masai cattle herders about 50 years ago have been painted with rock art.

There are a lot of kopjes that are named after lions. Lions often go to these kopjes to just lay down and soak up the sun. Also, you might see a baboon, a giraffe, and a lot of different kinds of birds in this area, too.

The plains seem infinite, interrupted only by the occasional serengetikopje hippo. Those vast plains lack trees. The Serengeti Plains are the park's wildlife ecosystem's backbone. During the huge eruptions of Ngorongoro and other nearby volcanoes, a dense ash rain fell over the plains, creating a hard surface that inhibited tree rooting but favored shallow rooted grasses rich in minerals. These mineral-rich grasses are crucial in many animals' diets, especially breastfeeding animals, which explains why over 80% of the wildebeest population gives birth on these plains. Every October to November, the Plains are buzzing with activity as the animals take advantage of the fresh new grass and short-term growth spurt. The short-grass plains will shortly dry up as there is no permanent water source here.

The national park's southern-central region contains the area. The area has numerous kopjes and numerous watercourses and rivers, making it one of the best places to see wildlife in the park. Hippopotamus can be seen frolicking in the Seronera River's riverine forest, which is rich in African species. The Seronera River Circuit and the Kopjes Circuit are the most gratifying of the many driveable circuits in the vicinity. Seronera Wildlife Lodge and public campsites are within a short distance of the Visitor Center. Wildlife displays are on show, as well as a gift shop that sells maps and informational booklets. A picnic space, a cafe selling cold drinks and snacks, and an educational trail meandering around a local kopje round out the amenities at the center.

The Grumeti River corridor stretches 50 kilometers from west of Seronera all the way to Lake Victoria. Unlike the southern Serengeti Plains, the area's landforms include rivers, valleys, hills, and floodplains, which represent a sharp contrast. Beautiful riparian woodlands line the banks of the Grumeti River, which flows year round. The optimum time to explore this area is between May and July, when the annual migration takes place. There are lions and crocodiles lying in wait for the weak and injured as they try to cross the swollen Grumeti River during this period! Non-migratory creatures, including as giraffes, eland, hartebeest, big hippos, and impala, can also be found in the corridor, which is home to a large number of non-migratory wildlife. Crocodiles of up to six meters in length burst into a vicious feeding frenzy when the migration passes through the wooded riverbanks, which are home to a colony of black and white African colobus monkeys.

There are beautiful rolling hills and huge granite rocks in the Lobo Hills, which is probably the most typical part of the park in terms of how it looks. An abundance of wildlife can be found in the area, which is punctuated by the yearly migration of the wildebeests each year. In one of the park's most secluded areas, safari game viewing is excellent and you won't see any other cars for long periods of time. This region's lion prides are one of the largest in the world. Acacia woodlands and dense scrubs replace the huge expanses of grassland plains as you go northward into this region.

From a distance, it's easier to see animals because of the undulating landscape. Visitors to this region are more likely to spot elephants because of the seasonal variations in the animals. When the animals migrate north to Kenya from July to September, or return in November and December, the higher terrain of the Lobo Kopjes offers spectacular views. To the east of the Lobo Wildlife Lodge, a scenic game watching circuit with numerous watering holes that are frequented by a wide range of wildlife. Elephants, buffalo, lions and zebras are all year-round residents in this area.

The Great Migration of over a million wildebeest herds, as well as hundreds of thousands of other hoofed species such as zebras, eland, and gazelle, takes place in the Serengeti, and it is one of the world's most spectacular natural spectacles. We can only dream of going there now.