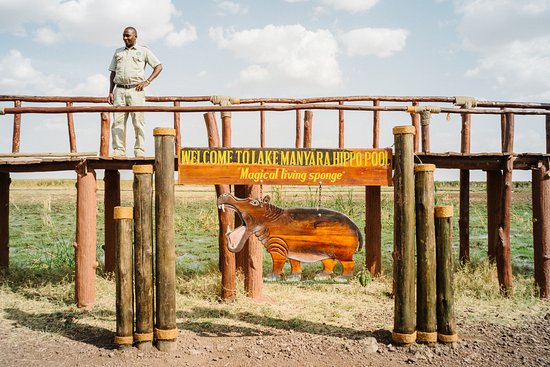 When we plan an exciting and more traveling trip, we want to see big Hippopotamuses, lions, (and various types of animals), beautiful trees, and interesting places. If that's the case and what you're looking for, Lake Manyara National Park is the place to be!

I've included some of the most critical points about this place that you should be familiar with.

Lake Manyara National Park is one of Tanzania's most beautiful places for African wildlife. It has a shallow lake that covers two-thirds of the park and is at the foot of the Great Rift Valley's western escarpment. Lake Manyara National Park's shoreline is made up of a lot of different types of habitats, like lush groundwater forests, a swampy fan delta, acacia woodlands, and a small grassy plain. Elephants are one of the largest concentrations in Africa. The algae growing in the lake also draws a large number of flamingos because they like to eat them.

This African National Wildlife Park, on the other hand, has a lot of different kinds of animals. This is the main thing that makes Lake Manyara so great for safaris: its many birds, the tree-climbing lions, and the hippos and other animals that you can see right in front of you! Author Ernest Hemingway wrote a book called "The Green Hills of Africa." In it, he talks about how he hunted African animals for their trophies in the African Lake Manyara National Park area, which was once a popular hunting ground for wildlife animals. Seeing animals in the national park can be difficult because of the dense groundwater forest areas.

It's still an exciting safari, though. At the start of your safari, it's a good idea to go to a game park. This way, you won't get too used to seeing wildlife. To see most of the park's sights and animals in one day, you only need to go there once. Please look at the map below for more information on this amazing and beautiful wildlife park in Tanzania.

The town of Mto Wa Mbu, which is mostly made up of farmers and people who buy and sell food, is right next to the entrance to Lake Manyara. The huge amount of groundwater that flows through the rock of the escarpment in this area has made it the perfect place to grow fresh food. Local farmers grow everything from bananas to maize in this area. The town is a paradise for souvenir hunters because it has thousands of souvenir salesmen who are ready to pounce at the slightest chance. To avoid malaria, make sure you use a lot of insect repellent when you visit Mto Wa Mbu.

There is always a lake close by in the Lake Manyara National Park, no matter how long it takes to get there. Because the lake gets its water mostly from rivers, streams, and escarpment springs, the water isn't very acidic.

Thousands of flamingos flock to the shores of Lake Manyara at certain times of the year. Pelicans, storks, cormorants, geese, and ducks all flock to the lake. Please look at the map below for more information and a safari guide on this amazing and beautiful wildlife reserve in Tanzania. 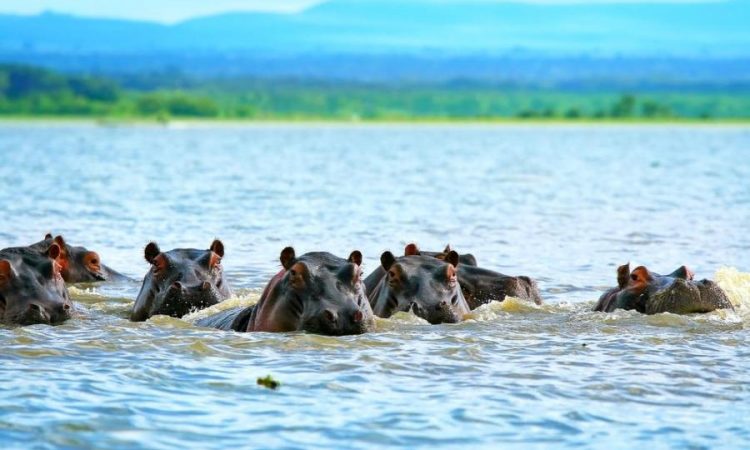 It's called the "groundwater forest" when you get to Lake Manyara National Park. This unique forest area looks a lot like a tropical rain forest, but it doesn't get a lot of rain like a rain forest does. Instead, the vegetation relies mostly on an underground water source. The African blue monkey, bush, and waterbuck, as well as the nocturnal aardvark and the vervets, which are the leopard's favorite food, live in this unique forest.

The forest, which is full of wild fruits and figs, is a big draw for the African elephant and the few black rhinos that remain in the park. It isn't just the 3000-pound animals that come to the Hippo Pool in the Simba River. Many parks have more than 400 different types of birds, including the fish eagle that lives near the Hippo Pool.

There are two rivers in the area where the groundwater forest changes: The Msasa and the Bagayo. Between them, the groundwater forest turns into a flat-topped Acacia woodland, which is home to the famous tree-climbing lions of Lake Manyara. Impala, zebra, giraffe, and elephant are also common in this area. They eat grass and eat other plants, like trees. Maji Moto Ngogo is a spring that is both fresh and hot (40°C). It is in the south, past the Bagayo River, where there are a lot of big baobab trees.

Toward the end of the park, the second set of hot water springs can be seen, with Maji Moto bubbling around at 60°C. This is a good place to boil your eggs for lunch. 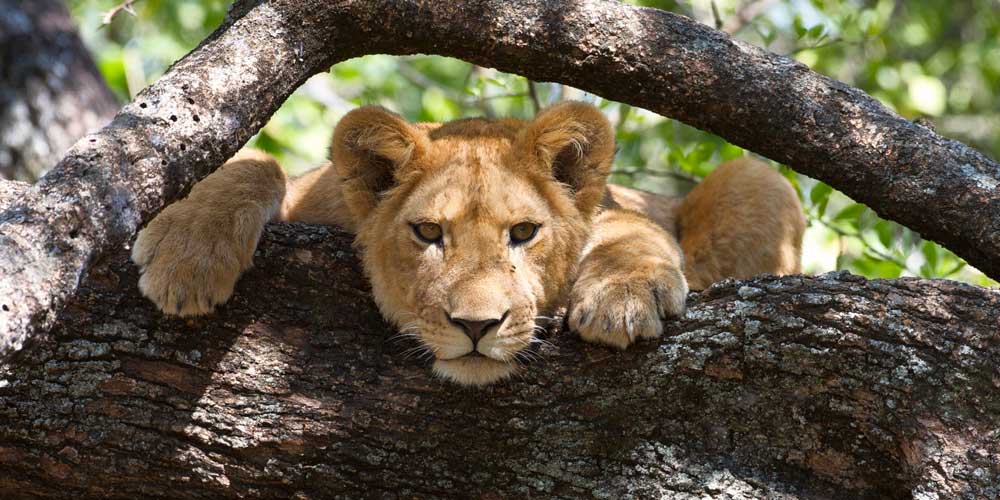 The cub is looking at the camera while climbing a tree

People who visit Lake Manyara are most likely to see lions, which are known for climbing trees. There is still no answer as to why the lions of Lake Manyara National Park spend so much time in the trees, but not the lions of nearby Serengeti and Ngorongoro Parks.

These umbrella trees, which are called acacia, are found in bushes and trees on the south side of the river. The Lions can hide from the sun there when it's too hot outside.

How Many Lions Are There In Lake Manyara National Park

The park had about 0.4 lions per square mile, which is almost twice as many as in Nairobi National Park and Ngorongoro Crater. Lions were found in the southern half of the park. In the northern half, two males had two separate groups of lionesses each of which lived in its own area.

In the wet season, a lot of flamingos gather around the edge of Lake Manyara National Park to eat and drink from the water.

It costs 59USD per person per day for foreign non-residents over the age of 16 to visit Lake Manyara National Park in 2022. Foreign residents and expatriates pay 30USD for the same thing. People from East Africa only pay 11,800Tsh for the same thing. 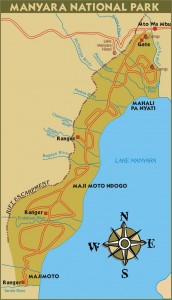 Is Lake Manyara the answer to your question about where to spend your vacation this year? Without a doubt, Lake Manyara National Park will introduce you to new experiences. Make reservations to learn more about it.

Have a safe and fun trip vacation.