Have you ever tried to witness one of the incredible things that can happen each year? The Wildebeest migration is a phenomenon that everyone wants to see in Tanzania. Every year, over a million wildebeest and 200,000 zebras travel the 480-kilometer (300-mile) loop!

Every year in East Africa, wildebeest, zebra, gazelle, and other animals migrate in spectacular herds that included millions of animals across Kenya and Tanzania.

Serengeti is home to an ancient phenomenon that is the largest movement of wildlife on the planet. Every year, over one and a half million wildebeest and a half million zebra and antelope move north from the Serengeti to the nearby Masai Mara reserve. They are looking for food and water.

Wildebeest Migration From December To March 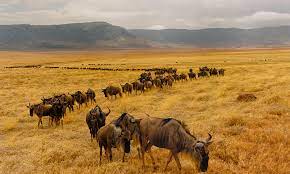 December to March is the best time to see the Serengeti Migration in the Ngorongoro Conservation Area. During this time, large herds of animals gather around Lake Ndutu. Wildebeest herds can be seen as far as the eye can see when the herd gets to the area.

Wildebeest have learned to have a synchronized birthing process, which means that about 90% of calves are born in three weeks. This is because the sea of grass gives little cover and the young are easy food for a variety of predators. Predators can't make a big dent in the number of newborn calves because there is so much food. Wildebeest calves can run just minutes after they are born, and they can do it all over again. The calves are strong enough to keep up with the herd in three days.

Wildebeest Migration From April To May

Three wildebeest are crossing the Nile River, and one of them is being attacked by a Nile Crocodile

After giving birth to their young in February and March, around April the wildebeest herds start to move northwest to the fresher grass in the middle of the Serengeti. Thousands of zebra and smaller groups of antelope follow them, as well.

A lot of grass has been eaten up in the Southern Serengeti so the herds have moved to the Serengeti's Western Corridor. Griffin vultures follow the herds on their journey because there is a high death rate for migrants because they are injured or tired, so there are a lot of them. The Grumeti River is north of the short grass plains.

This is their first real obstacle, and Nile crocodiles that can grow up to 6 meters long are waiting for the wildebeest to stumble at the crossing. Their lives are linked to the great migration in a very important way. They move with surprising stealth and speed as the thirsty herds drink from and cross the river. They hunt them down as they do. 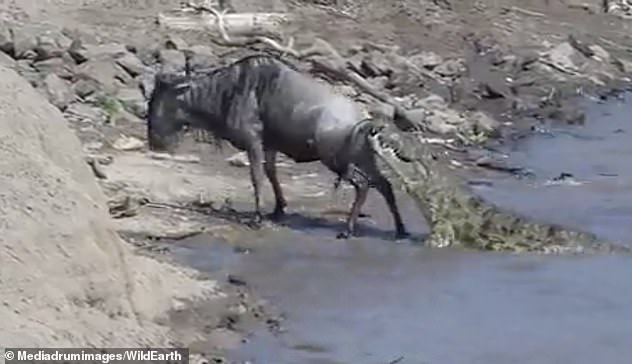 There are some channels in the Grumeti River that can stop or slow the wildebeest as they move north in June. In the Western Corridor, wildebeest gather. Before crossing the river, they often build up to a lot of people.

Following rains, the wildebeest migration travels northward until it reaches the Kenyan border and enters the Masai Mara National Reserve. There is nothing that can stop the stampeding hordes. There is another river crossing required, this time the Mara, which is home to flotillas of ravenous crocodiles.

It is not a calm time, as it is rutting season, and each male is attempting to create a stamping site. Once the migration has made its way westward, it is divided by an inexplicable sense, with one group heading northeast and the other heading due north.

Wildebeest Migration From July To October 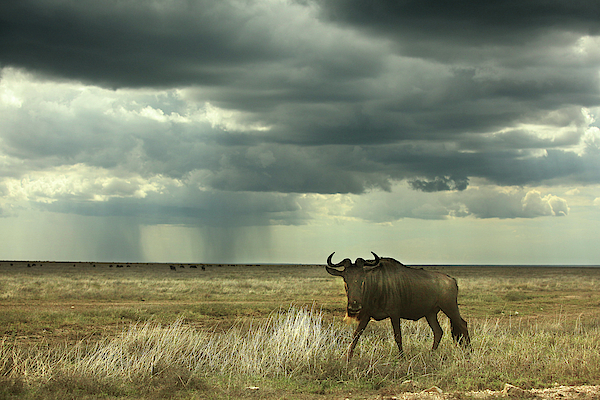 Grunting wildebeests stay on the Mara grasslands until October or November, when most of the ecosystem is too dry for them to live there.

Storm clouds start to form in southern Europe. Then, the huge herds of sheep and goats head back to their breeding grounds, which are once again green and lush.

October is when the wildebeest herds start moving again. They're all going south through western Loliondo and the Serengeti National Park's Lobo area, and they'll be back in the short-grass plains of the southern Serengeti in November. 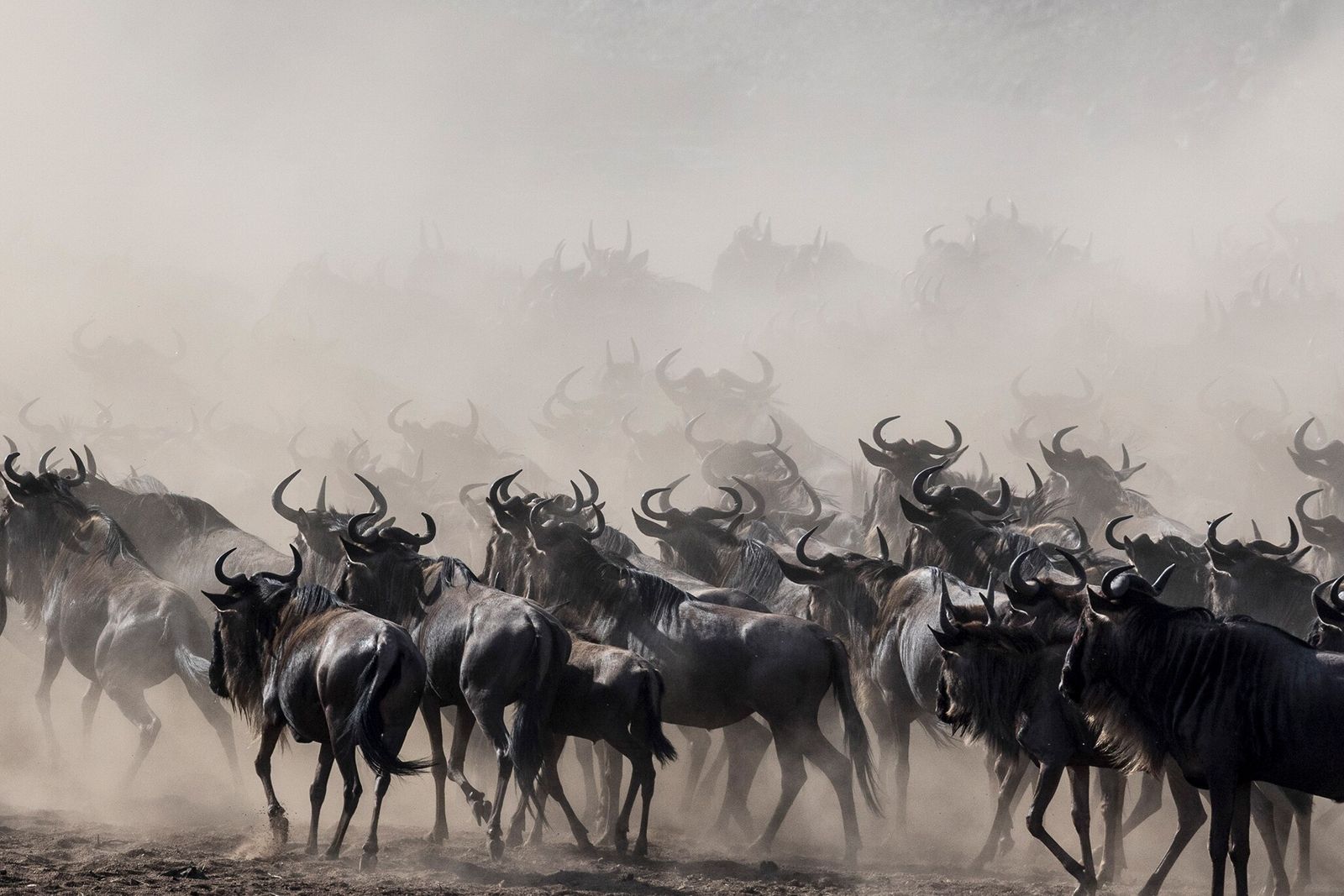 Grunting wildebeests stay on the Mara grasslands until October or November, when most of the ecosystem is too dry for them to live there. Storm clouds start to form in southern Europe. Then, the huge herds of sheep and goats head back to their breeding grounds, which are once again green and lush.

Grass grows differently in different places, so wildebeest migrations aren't always the same in both time and direction. So, the wildebeest may leave the open plains earlier in some years, and stay in the northern woodlands for longer in other years.

What Is The Purpose Of The Migration Of The Wildebeest 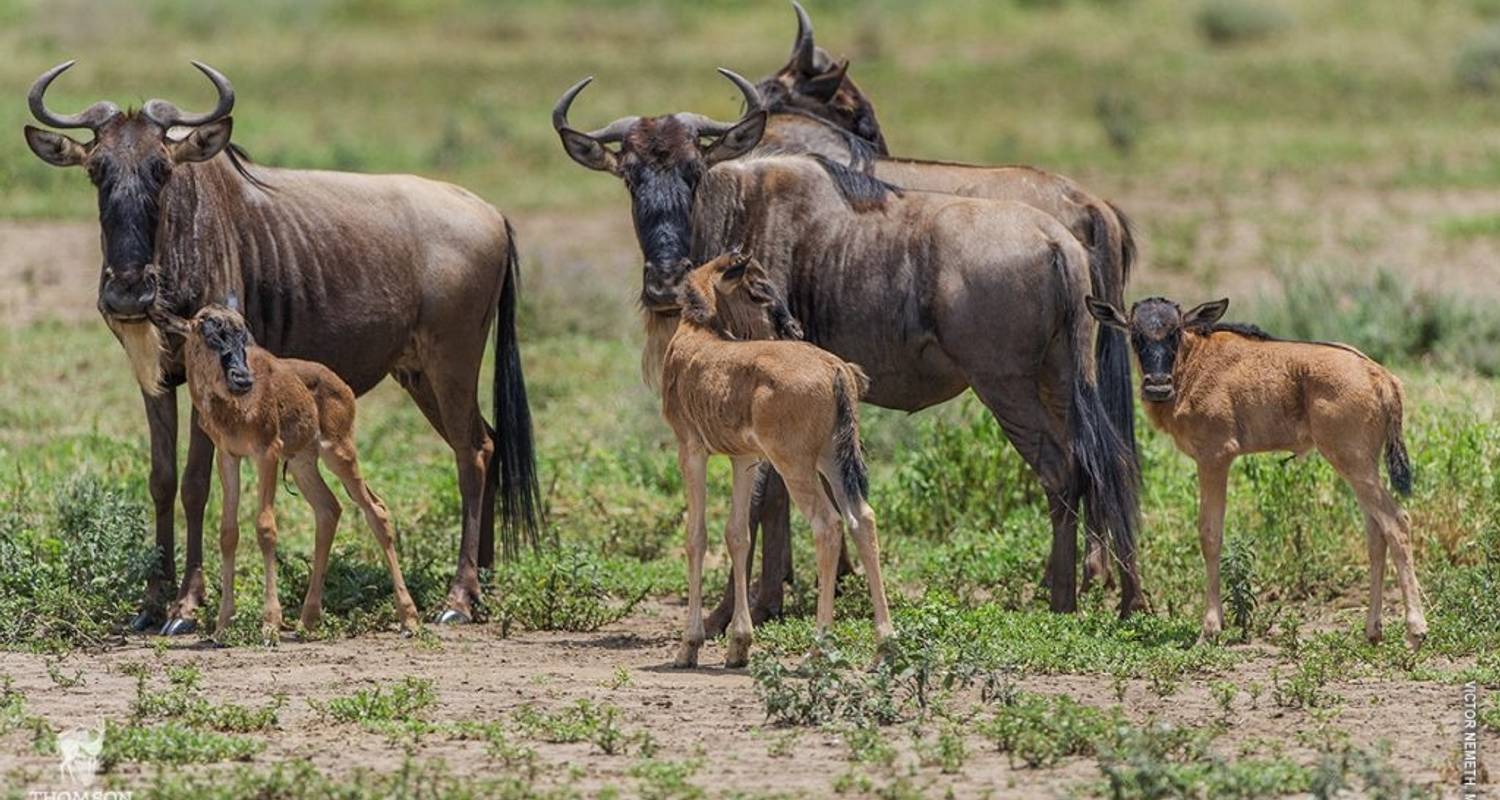 Three wildebeests and their calves

The wildebeest move around the Serengeti and into the Masai Mara to follow the rain. During the months of December and March, they always start their calving cycle in the Southern Serengeti area of Ndutu and move on to where the grass is better.

How Do Wildebeest Know Where To Migrate

It's not clear how the wildebeest know which way to go, but it's thought that their journey is mostly determined by the weather. They follow the rains and the growth of new grass.

At the Serengeti migration, more than two million animals move around: more than one million wildebeests and hundreds of thousands of other animals.

In January and February, more than 500,000 wildebeests are born. About 8,000 are born each day, which is about every other day.

You can now see how and why the Wildebeest migrate every year. Truly, wildebeest migration is a thrilling experience; they travel in groups to the best possible destination in order to live and reproduce more calves, who will also accompany them on their adventures.

But we also see how difficult it is for them to travel every month just to survive. We should be grateful for this phenomenon, and reading this article will help us understand their way of life.